HOME > About Us > Environmental Activities

On March 19, 2007, we acquired ISO14001:2004 certification with the aim being a corporation which takes the environment into consideration at all times. We built an environmental management system, and use of this system was started in the company from November 1, 2005, and resulted in the acquisition of the certification. 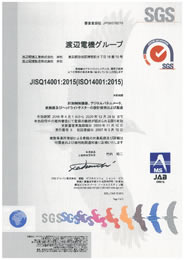 We recognize that preservation of the global environment is an important
issue common to mankind, and we will contribute to the realization of a society
which is able to maintain development while protecting nature.

1. Continuously aim for reduction of environmental impact, as a manufacturer of measurement and control instruments.
We will promote the saving of resources and recycling, striving for the prevention of environmental contamination in each phase of the life cycles of research of the products, development, production, sales, service and disposal.
2. Contribute to the protection of the global environment through technical creativity.
The intention of our company is to always develop state-of-the-art technology, and strive for the development and sales of environmentally harmonized products.
3. Comply with laws and ordinances, regulations and other restrictions concerning
the environment.
We believe that it is important to be recognized as a member of the community, follow the rules and strive for the realization of an environmentally sustainable society.
4. All employees understand the environmental policy, and recognize their
own responsibilities before taking any actions.
The employees of our company understand the environmental policy, and will strive for realization of the policy in their daily business activities.

About the efforts to the RoHS Directive

What is the RoHS Directive?

The RoHS Directive is a directive that restricts the use of specific hazardous substances in electrical and electronic equipment distributed in the EU.
It was promulgated in the Official Journal of the European Union on February 13, 2003 and came into effect on July 1, 2006. (Hereafter referred to as RoHS1)

From July 22, 2019, the restricted substances have been expanded to 10 substances.

The Watanabe Electric Group does not contain specific hazardous substances restricted by the RoHS Directive as part of its environmental conservation activities.
Alternatively, we are working on manufacturing products that are below the threshold.
The display mark of the RoHS directive compliant product is from the product that has been confirmed to be compliant with 10 substances.
Instead of the conventional 6-substance compatible mark, a 10-substance compatible mark has been added to the product information screen on the home page.
It will be described in the product specifications.